Posted by rivulet at 1:49 PM 4 comments: Links to this post 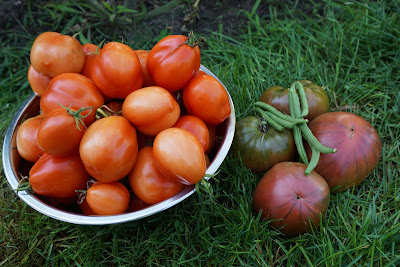 Today gave us one big bowl of romas, the last of the black krim tomatoes
and the first of the bean harvest.

The stores have switched over from summer and back to school merchandise and are filled with autumn, Halloween, and harvest themed products. It certainly still feels like summer but these tomatoes and beans are harvest blessings in my book. Feeling thankful.

Posted by rivulet at 4:39 PM 12 comments: Links to this post

This year's tomato harvest was a bit smaller than last. I'm not complaining; we still had tomatoes galore. The weather this summer was a little odd and I put the plants in the ground quite a bit later than normal so all things considered I'm thrilled with the harvest.

Yesterday I made this year's second batch of tomato soup. I've just decided that fresh from the garden tomato soup is my very favorite thing to do with the plethora of tomatoes. I've taken to growing two varieties. For a few years now I've been growing a plain standard roma that my son and husband love to just gobble up cut in half with a bit of salt sprinkled on. The romas are good for so many other things too but in this house they are mostly just eaten fresh from the garden. The second tomato I've been growing is a real ugly heirloom called black krim. Honestly, once you cut into it it's not ugly at all. It's actually beautiful swirled with bright greens, very deep magenta reds and bright reds, filled with sweet juices that you can see all surrounding the seeds, it's lovely! They are perfect for anything (that you don't want too much tomato juice on). Fantastic for making sauces and salsa. I love a big slice of black krim on a hamburger or inside grilled cheese... the list goes on and on.

And, the black krim makes an awesome tomato soup! The tomato is so incredibly juicy and sweet that the soup resulting from it is unbeatable. I made the first batch from this summer's bounty about three days ago. I used three tablespoons of oil, a teaspoon of chopped basil, a teaspoon of salt, and some black pepper to saute five (large) chopped cloves of garlic. Then I added two cups of homemade chicken stock that I had in the freezer. To that I added an awesome colorful heap of largely chopped black krim tomato slices (I think it was about 8 large chopped tomatoes). About 30 minutes later, after simmering for at least 20 minutes I had a pot of awesomeness. Add a little whole milk or heavy cream, plop in the blender and get it all pureed and... amazing!

Last year I froze several bags of soup but this year after two large batches there's nothing to freeze. We can't stop eating it. I have to say, I'm excited that fall is just around the corner. I love the cool breeze in the air, the apple harvest, pumpkin season, sweatshirt weather... amazing colors everywhere the eye can see. Fall is awesome but for right now I'm still REALLY enjoying the joys of summer, even though soup sounds like a cold weather sort of thing : )
Posted by rivulet at 12:08 PM 10 comments: Links to this post

Email ThisBlogThis!Share to TwitterShare to FacebookShare to Pinterest
Labels: Tomatoes

How often do you look at the stars? I used to spend a considerable amount of time beneath their splendor. Combine that I lived in the country for several years (where light pollution doesn't ruin the view), I used to stay up so much later than I do now, and I spent endless hours driving between friends houses and driving home at night from friends houses; I think I've spent a good portion of my life under the speckled black canopy.

Looking up into the endless darkness spotted with those tiny bright dots is always awe inspiring. It makes me feel smaller and so much grander all at once. Countless people have written about the stars, paintings, photographs; artists have been trying to trap the memorizing beauty and grandness of the night's sky forever. We don't often have a clear sky in Michigan. In fact we have upwards of 90 percent cloud cover during all of the winter months. Last year they reported 94% cloud cover all winter long. That means that we only saw the sun and sky peaking through 6% of the time last winter.

Yesterday when leaving for work there was a perfectly clear star speckled sky overhead. I only had a few minutes to stop and marvel at it. My neighbors always have all of their outside lights on (it's weird). There are street lights just a few houses away at each corner... I could see the stars as I left for work and they were beautiful but it's not the same just glancing up at them while I leave for work at 5
am. I am writing this post as an encouragement for myself to get in some really good, purposed stargazing time before the end of fall.

You know that feeling when you stand at the edge of an ocean or look out onto the horizon from the top of a mountain? You feel like you're looking at something enormous, that you can see farther then you've ever seen before. Something so very much bigger than yourself if passing before your sight. I think the night sky, uninhibited by clouds beats both of those views, despite it's simplicity, despite it's being present each night (however, visible less often). Looking into the stars not only means one is looking billions of miles away (when can we ever claim that) but we're also looking into the past. One star is sending light from from five years ago. Looking at that one bright dot means looking five years into the past. Five years ago when my son was an infant, five years ago when my husband and I were at different jobs, when people who were still alive but are no longer, that light was just given off. Other stars are shining that was first given off 20 years ago, 50 years ago, 450 years ago. Light from when your mother was first born, your grandfather, during world war II and all the horrors, during the highlight of the Roman empire, and when Jesus walked the earth. Anything you may have read in history book. It's all in the star light. Standing beneath a clear night sky, right now, in this moment, light from all over history is showering down upon us.

It's not quite like looking at a fabulously old tree or a piece of stone that may be millions of years old. Viewing light from the stars is actually like looking into the past. The very same light you and I see from each of the different stars is the light that was given off by that star however many years ago. It's literally like looking back in time. I don't think most people stand before a clear brilliant night sky and think to themselves, "wow, I'm looking at history," but I think most of us can feel it. Without thoughts, without words, stargazing is still just as powerful an experience.
Posted by rivulet at 8:36 AM 9 comments: Links to this post

I have a word of advice, especially if you're a regular coffee drinker and especially if you like a pretty good cup (you know, like you're not in the habit of stopping by gas stations to buy a cheap cup of the dirty brown stuff. Maybe there's even a certain bean you prefer, like say a good rich Guatemalan bean).

Last week in an attempt to pinch pennies (for real though, almost nothing has changed here in the past few months) I picked up a cheap can of coffee. I won't name names. Great idea, right? No! For the past week I've been drinking coffee that smells like poop or at least very close to it. Okay, it's not that bad but seriously it's gross. I'm not in the habit of doctoring up my coffee. I mean I usually drink it black or with a teaspoon of sugar. But black coffee that smells like poop doesn't taste much better and it wasn't worth the $3 I saved. And yes I keep drinking it because I paid for it. Bleck! If you're thinking it might be rotten or something, it's not. It's just cheap and I can't bring myself to purchase creamer to help hide the flavor because that would counteract the whole "saving money" thing.

So, my advice: Brew at home. That saves a lot but don't try and pinch pennies buying cheap grounds or you might pay for it.

(Yeah, this isn't really an advice column. I just wanted a "constructive" way to complain about my poop coffee)
Signing off.
Posted by rivulet at 5:55 PM 14 comments: Links to this post


I had this sudden compulsion to stop by blogger and count my blessings... well at least five of them. It's much too much of a beautiful end of summer day to not quickly jot something cheery down.


This year has been really busy and really pretty wonderful. I did a heavy priorities check awhile back and majorly cut my online presence. The most significant omission was deactivating my facebook account for several months. There are a lot of people on facebook that I have little contact with otherwise but it was wonderful not having the monster that is facebook as apart of my life for quite a long while. I never meant however to stop blogging but leaving facebook, committing to spending almost no time at the computer during little Abe's waking hours, and loving the dis-connected life sort of just led to my unintentional absence in blogger. I've missed you all!
Posted by rivulet at 5:11 PM 10 comments: Links to this post

Total Debt Reduction
$0 $147,805
get a progress bar at dollartimes.com

Emergency Fund
$0 $1,000
Get a progress bar at DollarTimes.com