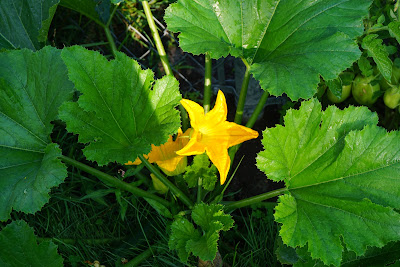 I've noticed that the zucchini blossoms only open up for a short while in the early morning and once it closes the same blossom doesn't open up again. Those leaves are enormous though. It's hard to tell from the photo but the blossoms are really large!

So far we've gotten four zucchini from our two plants. The fifth one will be picked today. One was used for the weird lemon zucchini bread. One was chopped and roasted. One was grated into the meatballs I made last night. One is currently sitting on the counter.

It's really only been the past few years that I've grown to LOVE the summer harvest. Even though I've only ever had a small little garden, I've completely fallen in love with the task. This year we planted zucchini and tomatoes in our garden. It hasn't warmed up until fairly recently so the tomatoes are slow going but been able to pick a few. The zucchini plants are getting huge. We went blueberry picking pretty much right when blueberry season opened up. And a friend of ours gave me a large bundle of rhubarb that ideally we'll make a big batch of strawberry rhubarb jam with today.

Fall has always been my favorite time of year, followed by spring. I really love sweatshirt weather when there's a crisp breeze in the air. Bonfires and fallen leaves... magical. But summer is really creeping up there as a fabulous time of year. I don't think I will be able to say I have a favorite season any longer. There's just too much joy that comes from fresh summer harvest and watching my kids play in the water during days of extreme heat.
Posted by rivulet at 9:00 AM

Email ThisBlogThis!Share to TwitterShare to FacebookShare to Pinterest
Labels: Gardening

Total Debt Reduction
$0 $147,805
get a progress bar at dollartimes.com

Emergency Fund
$0 $1,000
Get a progress bar at DollarTimes.com